What’s In Your Milk? 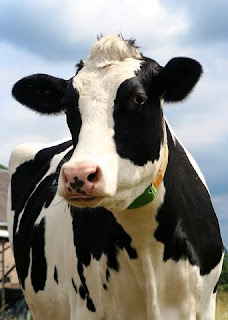 by Bill Gehm, UdderlyBetterMilk.com
Story
Most, if not all consumers expect that the milk they consume is of high quality. The primary measure of quality in the dairy industry is somatic cell count which is measured in numbers of cells per milliliter. A somatic cell is a white blood cell and is present in the milk in elevated levels due to a bacterial infection. The current U.S. legal limit is 750,000 cells/ml. This equates to about 375 million white blood cells in a medium sized glass of milk. High SCC levels in milk are not desirable for many reasons which include the fact that with the presence of high levels of SCC, bacteria or both will result in activating lipolytic and proteolytic enzymes that breakdown milk fat and protein resulting in off flavors and shorter shelf life. Since these enzymes are heat stable and not completely inactivated by pasteurization, milk protein and fat degradation continues even in refrigerated pasteurized products.
The question now becomes what is the true quality of milk being processed. The University of Minnesota disclosed in the Journal of Animal Science that less than 26% of the herds of that state were capable of consistently delivering milk with an SCC under 400,000 and that only 38% could consistently meet the legal limit of 750,000.
This information prompted me to determine what the data is for New York State dairy herds. A local milk processor was contacted and willingly provided the data for herds shipping milk to that processor. A review of that data revealed that the SCC results were very similar to those for Minnesota. Another processor was contacted and rudely stated that the data was not going to be made available. I then submitted a Freedom of Information Act request to NYS Department of Ag & Markets requesting the SCC data for NYS dairy herds.
The request was made in August of 2009 and was followed by mixed periods of silence, questions, requests to reduce the amount of data and finally a denial of the request by Rebecca Smith stating that the basis of denial was that the request was “too broad or vague to address”. I had provided numerous responses to questions and even provided specific web site addresses containing the data and details to simplify the request. It is my opinion that NYS Department of Ag & Markets simply does not want to disclose the facts regarding the “quality” of milk being accepted for human consumption.
The limited data received from the one NYS processor shows that quantities of milk are being accepted that do not meet the legal maximum allowable SCC limit. The data also shows that many herds are not capable of meeting the level of 400,000 which is not considered to be high quality milk. The average of the data is all that the industry speaks of. The average of the herds producing milk with an SCC below 200,000 with herds producing above 400,000 is typically just under 400,000. This basically means that the poor quality milk with high SCC and high bacteria is being diluted with better quality milk to meet the average.
The questions to be asked are the following. Why is NYS unwilling to release milk quality data? Why is milk being processed for human consumption that exceeds the legal limit? What is the true quality of the milk that you drink?

William Gehm was raised on a 70 cow dairy farm and consumed raw milk daily until his father retired from farming. He obtained a B.S. in Applied & Engineering Physics from Cornell University and a M.S. in Electrical Engineering from Syracuse University. His early career was as a Laser Physicist followed by numerous years leading teams of engineers designing mechanical packaging for aerospace engine and flight controls. Throughout that time period his father operated a small dairy farm and battled mastitis and the associated failings of the universities in addressing this costly problem. It was his frustrations with veterinarians and universities blaming dairy farmers for unacceptable milking performance and poor milk quality delivered by conventional milking machines that drove him to research and develop an innovative milking system. The success of that product evolved into a company marketing innovative dairy equipment products worldwide. The focus remains on enabling dairy farmers to be successful in providing quality milk while milking cows in a humane manner to increase their productive life. To learn more about this breakthrough product, visit my Copulsation website. I have also put up a site about Cornell Dairy Research on my system, and a consumer site called Udderlybettermilk.com.
Posted by theunprofessor at 8:06 AM